An American Goliath in Afghanistan by Vann Spencer

The following is largely based on an interview with Contractor, MSG (Retired) Michael (Train) Beltran

When Train arrived, the leadership was comprised of all Viet Nam vets, mostly SF. He spent eight years there and didn’t want to leave, but he had attended the assessment and selection course for First SFOD-D, and was accepted! He was ordered to Ft. Bragg, N.C., and was assigned to Delta where he remained until his retirement in 1995. 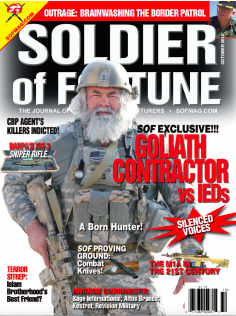 He then worked for Safariland as their Latin American sales manager until he hooked up with AimPoint U.S. as their Government Sales Manager for five years. At AimPoint he was missing the life of the warrior. That is where we met him and figured it was only a matter of time until he signed up for some hot spot.

He was supporting soldiers with equipment, but wanted to get back to what he knew best and support our soldiers. He knew that he still had something to give. He worked out hard for six months knowing that he would be in the Himalayas, and then took a job with Wexford; a CACI company in support of Asymmetric Warfare Group.

To Afghanistan He later signed a contract to go to Afghanistan as a senior tactical advisor with NEK, working for Joint Improvised Explosive Device Defeat Organization (JIEDDO), assigned to Combined Joint Task Force (CJTF) Paladin. One of the best assignments of his life, he told us, was in the Regional Command–East, Afghanistan, close to the Pakistani border in Khost Province. There he was assigned a Counter-Improvised Explosive Device (CIED) mission.

He was far removed from headquarters as a senior tactical advisor. He was contracted to a JIEDDO CJTF counter-IED unit. He and 26 other advisors were assigned to Afghanistan with the mission to advise, train and prepare.

The role of the advisors was to be right beside the soldiers, helping them get through the day so they could get back home. A group of five men would investigate any time word came across of an IED incident. They ended up spending most of the time in insecure areas where the fighting was. The goals were to exploit IEDs, gather tactics, techniques and procedure (TTP) and evidence to be used later.

With Train’s combat experience, he believed that he could help the troops through the tense times when the bullets were flying to make logical decisions. He was in charge of 26 other tactical advisors throughout Afghanistan, every unit of which had different needs based upon their skill set and geographic locations. If some coalition troops ran over an IED, the advisors would secure the immediate area first. Then they would check around for secondary IEDs. The Taliban typically blew an IED and got out of the area. The terrorists would video it and watch it from a distance so they would not get caught.

IEDs Account for Half of Coalition KIA in Afghanistan Around $20 billion has been budgeted for JIEDDO in the War on Terror, according to official sources. Although the program has had its critics because of its high budget and a loose accountability structure, no one argues the fact that countless lives have been saved. Rather than using the term counterinsurgency, the military coined the mission Counter-IED.

As of July 2012, there have been nearly 3,100 coalition deaths in Afghanistan, nearly half of them caused by IEDs. By 2009, IED attacks were skyrocketing. In 2009 there were over 7,000 hostile attacks, resulting in 448 KIA, of which 275 resulted from IEDs. In 2010, when IED attacks kept increasing, of 630 KIA, 368 were killed by IEDs. The charts included from icasualties.org give the overall story.

Salerno for Four Years The forward operating bases (FOB) are like some other bases, sort of like when the U.S. was moving settlers across the West. They would set up forts where they could then project their power and ensure that everyone in their vicinity was protected, and to keep the peace over a large area. These forts could also offer quick retaliation for any assaults on the people under their watch, Train told us.

FOB Salerno, also known as Rocket City for the incoming rockets, would be Michael’s home for four years. The compound is surrounded by Hesco Barriers. Most of his time was spent there. The base has the full capability of supporting the troops in the field, whether the situation calls for close air support (CAS) or field artillery. It also has a PX, coffee shop, and a full sized gym.

“It was a close to home as I could get. At first we were living in tents, then wooden structures, and then cement buildings. In the end we had great living conditions,” Train said.

The military hired Afghans for interpreters, construction workers, dining hall, and maintenance. They would be escorted on to the base each morning, with a few interpreters staying overnight for emergency response.

Train and his teams did not trust the local interpreters explicitly, amongst other reasons because they constantly rotated in and out.

Communications Were a Bitch Communications were very difficult. The in-country team managers and senior members would try to get intel on the different locations weekly and tried to communicate regularly, but it was nearly impossible.

The advisors needed more people. They needed numbers as large as those of a full company. They needed somebody in the rear to communicate and to work on numerous issues, from logistical issues to personnel matters. Their rules of engagement were perfectly clear. No contractor was sent to engage in a fire-fight. They carried weapons for self-protection. They were there to support the U.S. forces and used their weapons only as last resort. The military was to provide security.

On one occasion an intel source alerted that there was a vehicle born improvised explosive device factory (VBIED). Train and his team conducted a thorough search and gathered all the explosives, and palletized them for detonation.

When it was time for exfiltration, higher decided to conduct a show of force by moving through a small community two klicks away. This was a company sized element, so they were strung out over a large distance. Train remained behind with EOD because they were doing the detonation and wanted the main force a safe distance away. When they blew the charge, it was like initiating the fire from the insurgents who had surrounded them and had them covered a full 360 degrees. All incoming fire was considered ineffectual. 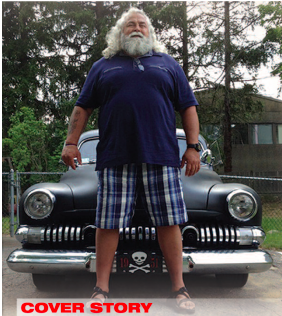 They moved a safe distance away and called in air support. Outmanned, Out Equipped, But Not Outsmarted Any time the Afghans tactically engaged the coalition troops in a firefight, the coalition troops would wipe them out. It was asymmetric warfare. Since they were weaker, they reverted to terror tactics and their weapons of choice were IEDs.

If a cell of five Taliban would go up on the road and engage in a fire-fight, only one may survive. They had to change tactics. They were basically a guerrilla force and such heavy losses were taking too much of a toll on their insurgency. They reverted to guerilla tactics and started implementing IEDs everywhere in Afghanistan, which was

much more effective against the high-tech troops. Odds were that they would plant the IED the night before and none of them would be there when it went off.

They would by chance hit multiple Americans. Americans would go out to the community one way or the other. The Taliban had cell phones. They knew the direction Americans were going. At first the bomber who planted the IED would have to be there to detonate it. He would not complete the circuit.

Then when he saw a target approaching, he would bend to tie his sandals and tie the loose ends of the two wires together to arm the IED. So the approaching vehicle that went by got hit. Later on the Taliban figured they could use remote control instead of that primitive method. They used garage door openers, cell phones, key fobs for autos, two-way radios, cordless telephones, remote controls for toys and any detonating device to remotely detonate the IED.

The Taliban Was Hitting Indiscriminately Train and the advisors had to become experts on all types of IEDs and how they would employ them. The guerillas were hitting indiscriminately. They had very detailed car bombs. One IED could hit a single truck, whether with a pressure plate or other means.

The Taliban’s techniques evolved from using car bombs to detonating from 100 meters with cell phones that could reach long distance towers. Some of the hand held radio walkie-talkies could reach a mile. But the Coalition troops did a good job of defeating them.

The troops would counter with jammers and use different ways to jam those frequencies. Vehicle-mounted and man-portable jamming equipment block radio frequency signals that detonate the IED and prevent the trigger signal from reaching the bomb. Over 37,000 jammers were fielded by 2008 already and tens of thousands since, according to official sources. Every U.S. military vehicle traveling outside an operating base is supposed to be protected by a jammer.

As attackers change frequencies and methods, jammers had to adapt. But with all of the techniques the troops used to jam the IED devices, the Taliban were just as clever and adaptable.

They would be watching up a hill and when a lead vehicle would drive over the IED, they would hit the switch. They could see the road from a half-mile away. Train and the advisors would jam them. Then the Taliban would adapt again. They would go old school, back to pressure plates and devices as primitive as a pull pen. When our troops went high tech, the guerillas would go low-tech again. This would go back and forth and back and forth again. All regions would be using different technologies and methodologies. One area could be using pressure plates, the other remote control. The advisors needed to learn all their techniques. They had to become familiar with the regions they were securing. The insurgency adapted.

So the counterinsurgency had to adapt. Train and his group of Special Ops advisors were well trained and all good teachers. They trained the troops in down time, mentored and guided them. The counter IED teams at the time Train was in country believed that their efforts helped to bring men home. No doubt they did.